The most popular variation of the Spritz Veneziano remains the Aperol Spritz.  Our Aperol Spritz consists of two parts Prosecco, two parts Aperol, and two parts soda water served over ice in a large wine glass.  Aperol itself consists of a variety of ingredients, including cinchona, gentian, and rhubarb.  Its manufacturer, the Campari Group, describes it as “the perfect aperitif,” with a “unique bittersweet taste and bright orange color” deriving from an original secret recipe.  Aperol’s formulation dates to 1919 when Luigi and Silvio Barbieri of the Barbieri company first produced the liqueur in Padua, a city located in northern Italy.  The product languished for decades before finally becoming successful after World War II.

Aperol features a distinctive bright orange color, contributing to visually appealing cocktails.  Served neat, the lightly alcoholic aperitif (11 ABV generally, however, Aperol sold in Germany features an ABV of 15 to skirt German regulations regarding container deposits) offers a zesty orange nose with complex herbal scents along with a touch of vanilla.  A smooth texture with long-lasting orange and wood notes makes the pleasantly bitter Aperol a great ingredient in a spritz.

A dramatic upswing of Aperol consumption, fueled by enthusiastic Aperol Spritz imbibing, occurred in Italy following the Campari brand’s 2003 acquisition of Aperol.  The Campari firm’s deft and well-coordinated marketing campaign a decade and a half later brought the Aperol Spritz into the consciousness of the United States market.  Fueled by Instagram users, the pretty cocktail became the summer of 2018’s most viral drink trend.  In short order, the drink arrived on the menus of hip restaurants and cocktail lounges across the country.

Less than a year later, the Aperol Spritz jumped the shark with the New York Times publishing Rebekah Peppler’s article, “The Aperol Spritz Is Not a Good Drink.”  Peppler notes, “the popular, Instagram-friendly aperitif drinks like a Capri Sun after soccer practice on a hot day.”   Noting this as “not in a good way,” Peppler lamented the “branded, jumbo wine glasses,” along with the paring of low-quality Prosecco and outsized orange slices resulted in an overly sugary aperitif.  Many bartenders agree with Peppler’s critique that overly sweet Prosecco reduces the drink’s quality.  We plan to explain in this post that this view while possessing elements of truth, fails to paint the entire picture.

Although viral cocktails come and go, the Aperol Spritz remains popular.  With a low alcohol content, an interesting mix of sweetness and bitterness, and featuring a crisp and refreshing nature, a well-made Aperol Spritz provides an excellent summer cocktail option.  After millions of Aperol Spritz Instagram posts, cocktail snobs might consider you 2000-and-late for posting yours, but we say go ahead with the knowledge that your version of the Aperol Spritz stands among the best.

An Aperol Spritz, by definition, must contain Aperol; however, a quick search reveals recipes that show widely varying proportions.  We present a recipe with equal proportions because we like the drink that way.  It also presents the easiest path for customizing the drink.  For those just getting started with the Aperol Spritz, using equal proportions initially speeds the process of adjusting the drink to your tastes.  If you simply want to skip ahead, another popular presentation consists of three parts Prosecco, two parts Aperol, and one part soda water, those proportions remain as the most common definition of a spritz.  The International Bartenders Association calls for 90 ml of Prosecco, 60 ml of Aperol, and a splash of soda water.  Obviously, ratios vary widely, so it’s best to experiment to determine your preference.

Does the Type of Prosecco Matter?

As noted above, many people pejoratively use the words “cheap Prosecco,” somehow making the leap that all sweet Prosecco equals cheap.  This represents a partly true simplification, to say the least.  Generally speaking, mass-produced Prosecco works best in Extra Dry, those pointing to the end cocktail being too sweet, arrive at the cheap argument from this point, by equating mass-production to cheap.  A bit of extra sugar does improve the taste of many of these Proseccos and without it, a sharpness or lack of taste would ruin the end Prosecco product and ergo your Aperol Spritz.  The position says better, drier Proseccos, featuring less sugar often come from superior wineries, with prime locations, top-quality grapes, and excellent processes that result in an end product that does not need additional sugar to cover up imperfections.  We acknowledge the validity of this portion of the argument.

Extra Dry remains the dominant style of Prosecco available, with the amount of Brut increasing.  Armed with a better understanding of Prosecco, we can begin to unpack this cheap-overly sweet Aperol Spritz argument.  “Overly Sweet,” simply means the drinker finds the drink out of balance.  In this case, the drink’s lack of balance falls to the sweetness side, and “cheap Prosecco” becomes the fall guy.  However, as much as we love to dissect and analyze various ingredients, simply blaming the sweetness solely on Prosecco ignores the drink’s other ingredients.  Further, many retailers only carry Extra Dry Prosecco, leaving us to look to other options for reducing the drink’s sweetness.

The ratio of Aperol used in the recipe impacts the end cocktail’s perceived sweetness far more than the type of Prosecco one uses.  As professional and home-based bartenders we must keep in mind that while our ingredients play an important part in our end product, the ratios in which we use them often play an even bigger part.   For example, with a food recipe, we often say, this “is too salty or this is too sweet.”  We don’t then look to adjust by swapping out for a different salt or sugar, we simply adjust the ratios in the recipe.  The Aperol Spritz should be no different.

With all of that said, certainly, you can use different sweetness levels of Prosecco to dial in your preferences, just figure out your preferred ratios first.  With balance always subjective, it’s easy to see why ratios vary across sources.  So, to answer the original question of if the style of Prosecco matters?  We believe it does, but much less than the overall ratio of the ingredients.

The most common presentation of the Aperol Spritz remains in a large wine glass over ice cubes.  Many bartenders and consumers accurately point out that over dilution ruins the drink.  Admittedly, our testers quickly consumed their Aperol Spritz eagerly waiting for another.  However for those who wish to consume the drink slowly, present the drink over a single large cube.  This drastically cuts down on unwanted dilution and provides a much longer amount of time to enjoy the best expression of the drink.

We did test a range of bitters in the Aperol Spritz, ultimately finding a consensus that the addition of grapefruit bitters added a subtle and distinctively welcome variation on the base recipe.  Orange and lemon bitters represent other paths to explore.

Most images show the Aperol Spritz garnished with an entire orange slice or with an oversized orange wedge.  To step up your garnish game, get creative with your oranges.  For example, simply adding a second orange wedge makes for a nice garnish out of the norm.  Other garnishes include lemon peels, green olives, mint, and even vanilla beans.

Please let us know how and why you customized your drink in the comments. 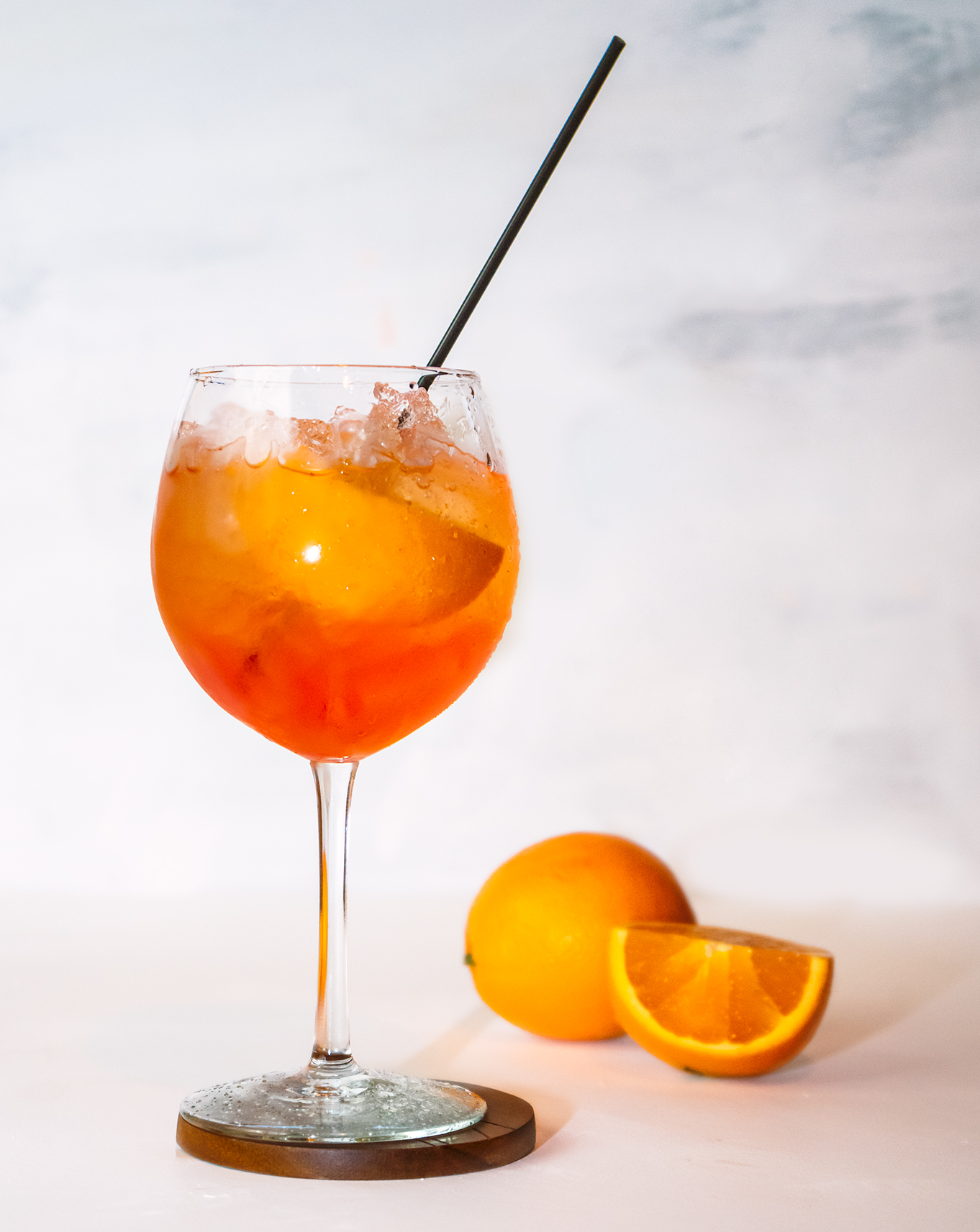