While not quite on the Mount Rushmore of cocktails, the versatile French 75 featuring gin and bubbles courtesy of Champagne certainly belongs on a very short list of the all-time great cocktails.  With an herbal nose and refreshing nature, the French 75 remains an excellent option for both a sophisticated New Year’s Eve soiree and a summer patio party.  Our tasters all concurred in observing that this drink with its elegance and grace “slides down fairly easy.”

The present construction of the French 75 developed over the 1920s with its routes in the 19th century.  An 1885 article about the Parker House hotel in Boston states that as far back as 1867 Charles Dickens when visiting Boston entertained the literary elite of the town in his room by serving Tom gin and champagne cups.  A champagne Cup consists of champagne, sugar, citrus, and ice so by adding gin, one arrives at something close to a French 75.  At the time, a champagne cup was in fact a popular cocktail and it was not uncommon to add gin.

Moving forward to World War I, in 1915 at the New York Bar in Paris, barman Harry MacElhone once again combined these ingredients and the concoction was said to have a kick like being shelled with the powerful 75mm field gun.  The 1922 edition of MacElhone’s Harry’s ABC of Mixing Cocktails offered a version consisting of Calvados, gin, grenadine, and absinthe.  MacElhone, however, never claimed the drink as his own, attributing it to Macgarry of Buck’s Club in London as its home.  That same year, Robert Vermeir’s Cocktails: How to Mix Them, offers a recipe with the addition of lemon juice while curiously crediting MacElhone with the invention of the drink.

By 1927, today’s formulation took its form and attached the French 75 name in the bootlegger friendly Here’s How!, by Judge Jr. at the height of Prohibition.  If one marks this point as the codification of the recipe, it would give the French 75 the distinction of being the only classic cocktail born in America during Prohibition.  This recipe resurfaced in 1930 as the French 75 in The Savoy Cocktail Book, and with its reach across the Atlantic, began to popularize the drink.  Finding its way to the infamous Stork Club in New York, the drink quickly became iconic.

Of note, later cocktail books like David A. Embury’s The Fine Art of Mixing Drinks swapped gin for cognac.  Some bars still offer a cognac version of the French 75.  Most notably, amongst these establishments is the venerable Arnaud’s, located in the heart of the French Quarter in Louisiana.  Further, some purists claim with some validity that the drink should, in fact, be made with cognac.  With that note, the International Bartenders Association classifies the drink as a contemporary classic using gin.

Odds are, no one really “invented” the French 75, rather it became associated with a French field gun that became an icon of World War I victory, giving it a certain prestige at the right time.  Supporting this theory, the novelist Alec Waugh touted the French 75 as “the most powerful drink in the world.”  With the 75mm Howitzer known for accuracy and speed and the French 75 having such a kick, the two became inextricably associated.

Due to the long evolving nature of the French 75’s recipe, few could fairly accuse someone of bastardizing the original recipe by using contemporary variations.  With that in mind, let us take a look at some fun ways to vary the French 75.

Many people opt to swap the Champagne for Prosecco, if you take that route, use a bit less lemon juice.  A good rule of thumb to keep in mind when altering the French 75 is Champagne needs less simple syrup whereas Prosecco needs less lemon juice.  Follow this rule and you will find the full texture of the fizz remains in the drink.

We used Hendrick’s gin in our French 75 recipe.  While Hendrick’s gin certainly possesses plenty of juniper, its floral notes provide a nice base for this cocktail’s construction.  Finally, its surprising amount of citrus provides a nice bridge to the lemon juice used in a French 75.

Other classic gin options include Tanqueray and Plymouth gin, which also offer big juniper cores that allow a nice balance in the recipe.  Other floral gins, particularly those with big lavender notes are preferred by a significant number of people and often result in some truly spectacular versions of the French 75.

Infusing simple syrup with herbs and other flavors provides one of the most fun ways to customize a French 75.  Infusing your simple syrup adds depth to the drink without competing with the main flavors coming from your gin and citrus.

Bitters represent a great way to experiment and customize the French 75 by making subtle modifications to the drink’s aromas, color, and taste.  Look to the botanicals used in various gins like angelica root, orris root, licorice root, cassia bark, orange peel, grapefruit peels, and dried herbs like coriander and anise to find bitters that play with your chosen gin.  In essence, find your favorite flavor note in your preferred gin and amp it up by marrying it with the right bitters.

During our tasting, we experimented with Peychaud’s bitters which feature a predominant anise aroma with a subtle mint background.  We also tasted grapefruit bitters in a different batch.  The group slightly preferred the Peychads, noting that the champagne came through a bit more than with the grapefruit bitters and the drink tasted a bit sweeter, which would likely remain true with any other fruit-based bitters.  Finally, the Peychauds dramatically changed the color of the drink to a subtle pink (the drink on the left in the photograph), which most of our group found quite striking.

A lemon peel and its variations remain the most common garnish for the French 75.  Rosemary sprigs are a great addition, especially if you happen upon a bottle of Martin Miller’s Summerful Rosemary & Arctic Thyme Gin.  On that note, some people jazz the garnish up with thyme and lavender.  Others finish the drink with a cocktail cherry pierced with a toothpick and wrapped in a long, thin lemon spiral.  It is also not unheard of to see a cucumber garnish, especially with gins featuring cucumber notes.  Our final takeaway when it comes to the garnish for a French 75 is to keep it simple, but elegant.

A simple Google search indicates that a Champagne flute is the appropriate glass for a French 75.  However, it is common to see the French 75 served in Nick and Nora, highball, Collins, and coupe glasses as well.  There is validity in the statement that a Champagne flute is the wrong glass.  According to the recipe in Harry MacElhone’s Harry’s ABC of Mixing Cocktails, a French 75 should be served in a highball glass.  While the highball and Collins glass are often used interchangeably, purists argue that the taller Collins glass is the proper glass to serve a French 75 in.  Pointing to the connection between a Collins glass and the shell of a 75-millimeter–both are tubular though the glass is smaller, this camp also notes that when reading the earliest recipes for a French 75, most of them mention serving it in a Collins glass over ice.  In fact, there is no mention of Champagne flutes, coupes, or other cocktail glasses in the early literature.

As far as size goes, bigger isn’t necessarily better as most people and establishments now serve the French 75 up.  Without ice, a larger drink is less likely to hold a proper temperature as at some point the crushed ice dropped out of favor in the French 75.  With this evolving preference of serving the drink up rather than over some form of ice, it seems logic would move the French 75 into a smaller glass.  Further, a twelve or sixteen-ounce serving of a French 75 will have you gone faster than a toupee in a hurricane.

With that in mind, and our desire to experiment with a variety of versions, we opted to serve the French 75 in a 5-ounce Nick and Nora glass, which leaves room for approximately 2.5 ounces of Champagne and presents quite nicely.  For those preferring different glasses, take note of your glasses’ capacity and adjust the recipe accordingly.

Summary:  Impressions and Other Takeaways

Using this recipe, most people find the drink in balance.  A few of our female tasters preferred a slightly sweeter version.  If that is you, there are two options.  First, find sweeter champagne.  Doux, with more than 50 grams of sugar per liter is the sweetest designation of all Champagnes but is difficult to find, especially in the North American market.  Your more likely option is using a demi-sec Champagne, which features 32-50 grams of sugar per liter.

The second option, which we consider a better idea is to simply add 1/4 oz. more of simple syrup.  Our rationale is one, it is far more convenient to modify the drink with simple syrup, especially if you are pouring for a crowd; two, with the amount of wine used in the recipe it is far more difficult to adjust sweetness; and third, it is simply easier to find Champagnes that run on the dry side.  For example, Brut, a French word meaning dry, raw, and unrefined remains the most common Champagne in the world and features a very low sugar content.

Enjoy and let us know where your French 75 journey takes you in the comments section below. 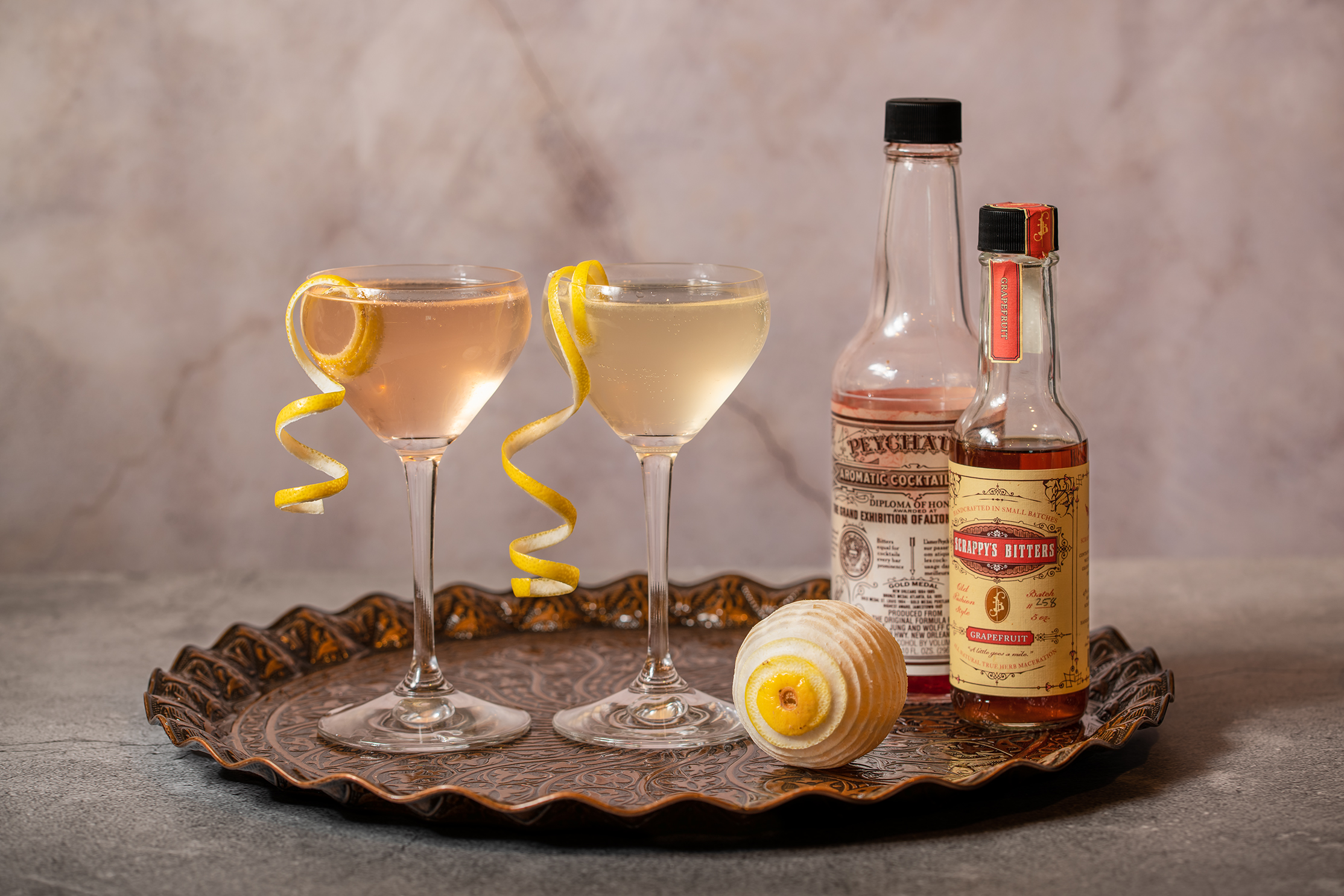 If using a Champagne flute