Similar to many classic cocktails, the Sidecar’s origins remain disputed. Legend states that an Army Captain rode up to Harry’s Bar in Paris daily in the sidecar of a motorcycle and requested a pre-dinner drink. Stories suggest the captain thought a Cognac alone would be an inappropriate drink before dinner or that French society considered it a bit uncouth and as a solution the bartender mixed Cointreau and lemon juice creating the legendary drink.  Another story simply substitutes Harry’s Bar for Buck’s Club in London with both versions laying claim to the cocktail shortly after the end of World War I. Finally, the Ritz Hotel in Paris also lays claim to the origin of the drink. Dale DeGroff, in The Essential Cocktail, argues these stories represent pure fiction and states the “word sidecar means something totally different in the world of the cocktail: if the bartender misses his mark on ingredient quantities so when he strains the drink into the serving glass there’s a bit left over in the shaker, he pours out that little extra into a shot glass on the side–that little glass is called a sidecar.” DeGroff suggests the Sidecar’s birth took place in New Orleans from a mix of leftover liquor. Our featured picture of the Sidecar acknowledges the legendary DeGroff’s interpretation, but nobody knows definitively. The drink itself is most closely related to the brandy crusta, though it differs both in presentation and in its proportions.

The first Sidecar recipes in print appeared in 1922 in Harry MacElhone’s Harry’s ABC of Mixing Cocktails and Robert Vermeire’s Cocktails and How to Mix Them. Both MacElhone and Vermiere present the recipe as equal parts Cognac, Cointreau, and lemon juice, which is known as the “French School.” Several years later in 1930, the Savoy Cocktail Book called for two parts cognac and one part of Cointreau and lemon juice, creating the “English School.” Simon Difford’s Encyclopedia of Cocktails further refined the proportion closer to what remains most commonly served today in all sours: 2 ounces of Cognac, ¾ ounces of Cointreau, and ¾ ounces of lemon juice. Difford accurately noted other formulas as being “overly dry,” effectively codifying a middle ground between the two schools. By 1934, three books also mention sugaring the rim of a Sidecar glass.

Clearly, the drink’s exact origin remains elusive. We do know, however, that the recipe simplified into three ingredients:  brandy, curacao, and lemon juice. Over the years, the brandy preference narrowed to Cognac and the curacao tightened to Cointreau. Since brandy varies widely from dry to fruity to sweet, it requires adjustment of the other ingredients.  With Cognac offering less variation, it became the preferred platform to build the drink. The logic of the Cointreau component follows a similar process with early curacaos both hard to find and erratically made, thus Cointreau’s consistency found a home in the Sidecar.

Nonetheless, the Sidecar remains a drink of iconic stature and when made properly, provides a great example of a Cognac cocktail with citrus highlights enjoyable in all seasons and capable of satisfying cocktail geeks and hoi polloi simultaneously. As drink historian David Wondrich points out, the Sidecar is “often singled out as the only good cocktail to come out of the long national nightmare that was Prohibition.” He accurately surmised that while most cocktails of the time used sugars and juice to cover up foul tastes in bootlegged booze, the Sidecar stands unique in its use of flavor to elevate its primary spirit.

Variations of the Sidecar

The Sidecar, like many classic cocktails, starts simply in theory but inspires great debate. The addition of small measures of various syrups dominates as the most common modern departure from traditional recipes, the rationale is that just relying on liqueur alone does not provide enough balance in a sweetened drink. A great modification we endorse is to keep the base spirit at two ounces while maintaining the lemon juice and Cointreau at ¾ ounce each and adding a teaspoon of rich demerara syrup to boost the cocktail’s body, complexity, mouth-feel, and sweetness. If the richness of demerara is not to your liking, try swapping it out with simple syrup or rich simple syrup.

Cointreau is rarely substituted as its clean, orangey properties excel in this recipe. However, some bartenders successfully utilize Pierre Ferrand’s Dry Curacao, a traditional triple sec that pairs nicely with Cognac. When pursuing this variation, keep in mind that this product’s sugar content is a bit lower and features a bit of characteristic bitterness that results in more perception of dryness on the palate. Since curacaos play an important role in connecting flavors, using a product like Pierre Ferrand’s Dry Curacao often complicates balancing an otherwise simple cocktail, but when executed properly leaves guests raving. Further along this path, some bartenders swap the Cointreau for Grand Marnier, another orange liqueur in the curacao tradition, which blends cognac and triple sec. For those that truly understand the curious world of orange liqueurs or for those with palates that lean in different directions, the Sidecar proves ripe for modification and innovation with an endless combination of possible, yet subtle flavor changes.

Another consideration when varying the Sidecar is the addition of bitters. A dash or two of a quality product like Regan’s or Bittercube orange bitters provides a subtle flavor that many enjoy in this recipe. Others prefer to add lemon bitters to the standard Sidecar, but this variation rarely goes well. If you opt to vary this recipe with bitters, the axiom, less is more, rings truer than ever.

Most presentations of the Sidecar include either a lemon or an orange twist. Other presentations offer a maraschino cherry by itself or in addition to the citrus used. Keep in mind, even if you choose to discard the twist after expressing its oils, the fruit does provide harmonious aromatics that bring the drink to a professional level and thus remains an important step. While little dispute exists regarding expressing the fruit’s oil into the drink, the subject of sugaring the rim generates more eye rolls than a political speech. With such a passionate split, determine from your guest directly to their preference. Some establishments also sugar half the rim as a compromise, but many bartenders find that a tackier solution than just asking. Keep in mind, when sugaring the rim, the drink must lean drier (less sweet) to maintain balance.

Base Spirit for the Sidecar

By definition, a Sidecar uses a brandy base. Further, most connoisseurs specifically demand Cognac. Great options for the Sidecar include Chateau de Montifaud Selection, Hennessy Privilege VSOP, Martell VS, Remy Martin VSOP, and Sacred Bond Brandy. Others even ditch the brandy entirely, opting for bourbon and creating a Bourbon Sidecar. 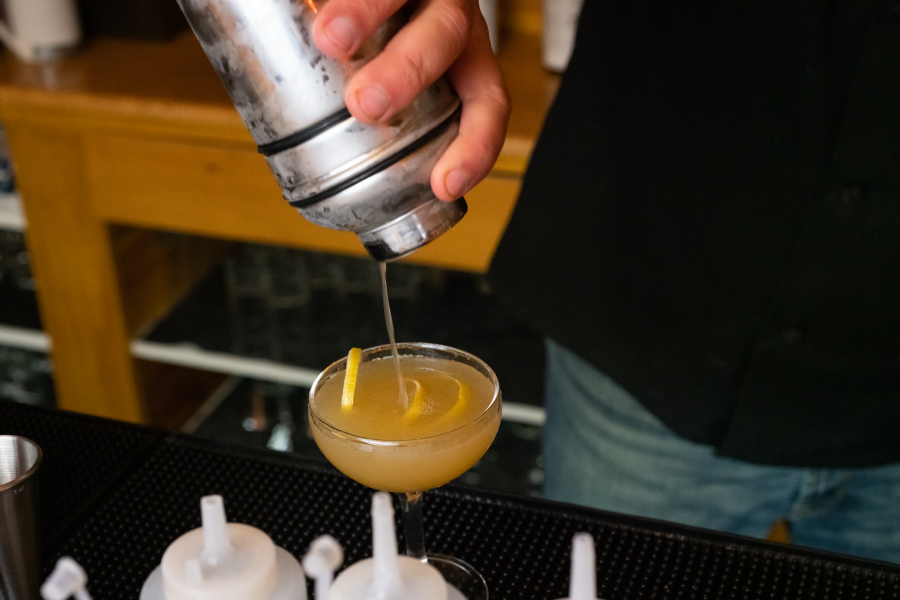 For this Sidecar recipe you need:

EDITOR’S NOTE:  We have received a great amount of feedback on this cocktail, specifically regarding the addition of the rich demerara syrup.  The suggestion being that it should be added to the recipe–it’s that good and we agree.  Here comes the BUT–we have a general philosophy of presenting cocktails as simply as possible with widely available ingredients.  Because not everyone wants to make it or has ready access to the syrup we have elected not to change the recipe for now.  For those of you adding the rich demerara syrup, add it just after step 6 (Cognac) then move to step 7 in the instructions and finish making the drink.  The rich demerara syrup is quite viscous and the Cointreau and lemon juice will wash any residual syrup our of your jigger.

The https://www.jiggersndrams.com website is one of the
best we have found, and the Sidecar | jiggersndrams article is very
well written and useful!
I want to share with you a link that also helped me a lot in cooking: https://bit.ly/easy-fat-burning-recipes
Thanks and kisses! 🙂

Loved this one, I did add the rich demerara syrup and yes!