Visually striking and refreshing, the easily made Blue Lagoon blends sweet and sour flavors to make a groovy cocktail with a tropical vibe. The drink lends itself nicely to outdoor parties and fairs nicely as a pre-batched cocktail, leaving hosts time to enjoy their guests rather than focusing on making drinks. The drink features just three ingredients: blue curaçao, lemonade, and vodka, combined and served on the rocks with garnishes ranging from simple to elaborate. This results in a thirst-quenching sky blue colored drink who’s sweet aroma and citrus harmony perfectly coincides with the end of a hot summer day. Those fortunate enough to enjoy a Blue Lagoon while the sun begins to set and a refreshing breeze comes in over the water certainly know how to live their best life. 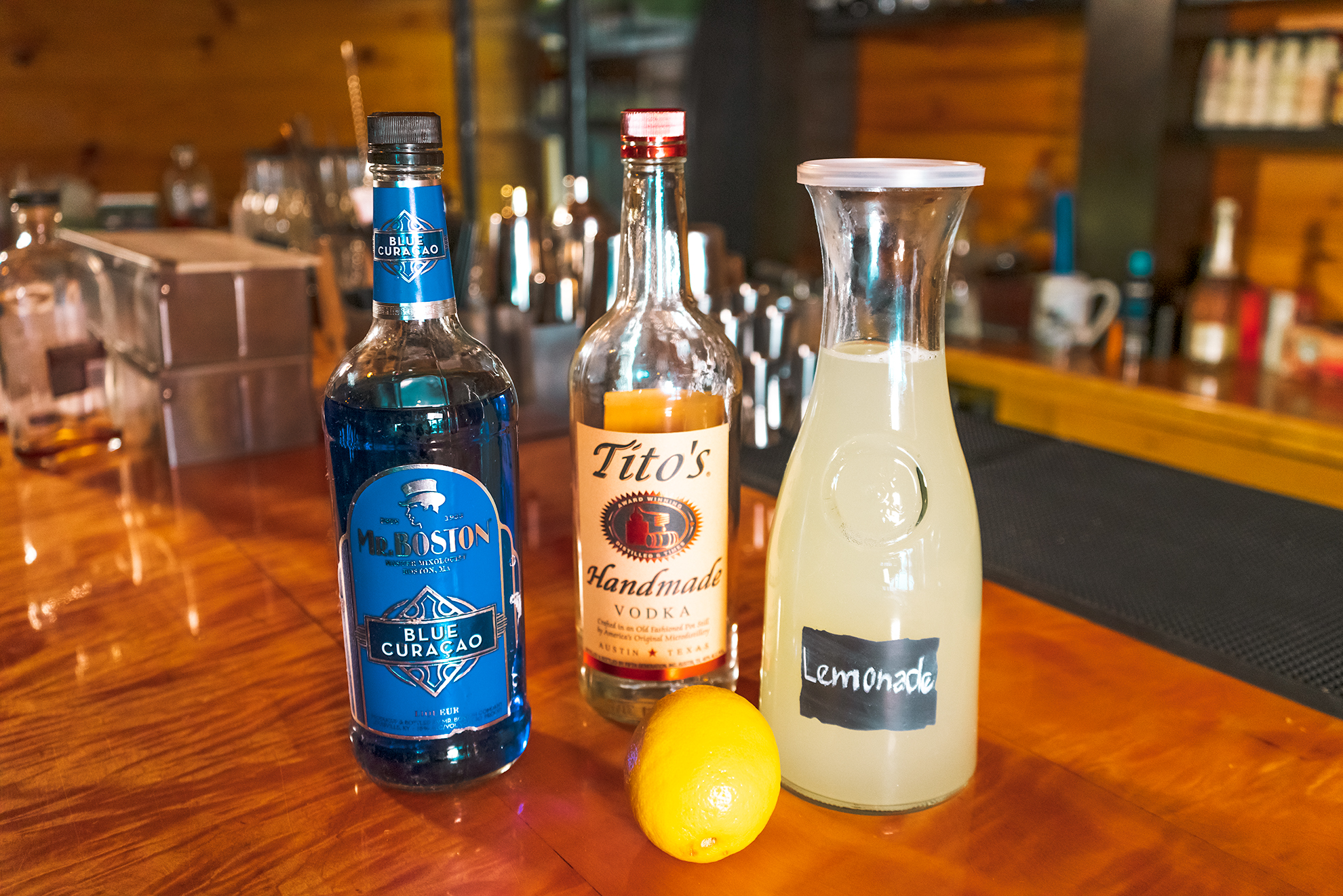 Like many cocktails, the exact version of the drink’s invention remains unknown. However, unlike many cocktails, the Blue Lagoon’s history does offer a very popular story of its origins. Like the Sidecar, many versions of the Blue Lagoon’s birth originate in Paris at Harry’s New York Bar, made famous by Scottish barman Harry MacElhone. Harry’s son Andrew took over the bar and furthered the bar’s legacy by inventing the Blue Lagoon, which he originally made with vodka, blue curaçao, and lemon juice sometime between the early 1960s and possibly as late as 1972. While today’s version of the drink replaces the lemon juice with lemonade, the original spirit of the drink remains.

A lesser-known version of the drink’s history states it was first made in Tahiti by the painter Paul Gauguin in the late 1890s, who, under orders from his doctors to avoid absinthe, mixed a variety of ingredients before finding something resembling the formula we know today. While Gauguin did reside in the Caribbean during his lifetime and possibly found the wonderful curaçao in his travels before settling in Tahiti, he passed away in 1903 well before the widespread availability of blue curacao. In fact, not until 1912 did the Bols company sell blue curaçao, then marketed as Crème de Ciel, meaning cream of the sky.

The Blue Lagoon remains a fun drink that deviates little from its original form. While bartenders may swap out various brands of vodka and blue curaçao, it results in very minor impacts on the quality of the drink. In fact, there is little value in using premium spirits in this recipe. The most variation comes from experimenting with the ratios of the ingredients, while our recipe features a 4:1:1 ratio of lemonade, blue curaçao, and vodka, other recipes successfully deviate from those ratios. The ratio of blue curaçao, in particular, most directly impacts the color of the drink, with higher proportions leading to a darker, deeper blue appearance along with a fuller orange flavor. Another variation calls for swapping out the blue curaçao for blue curaçao syrup, which serves useful for those creating a non-alcoholic version.

Flavored vodkas like Absolut Citron and Mandrin also find use in this drink with some going further and swapping out the vodka for a light rum or even gin. Bartenders experiment with the addition of either lemon or orange bitters, and occasionally cherry bitters to give the cocktail a bit more depth with some even advocating the addition of a splash of lime juice or lime cordial for a little extra flavor. Others add a dash of grenadine to create another variation known as a Fruit Tingle.

For those preferring a touch of carbonation, swapping out or cutting the lemonade with a lemon/lime soda offers an easy solution. To cut down on the sweetness a bit, halving the lemonade and replacing the other half with soda water also offers a refreshing, slightly bubbly alternative. Further, other drinkers prefer to add a bit of simple syrup to turn up the sweetness a bit more while another variation tosses the mix into a blender to turn the concoction into a frozen drink.

The most interesting variation though comes with respect to the garnish. Creativity in the garnish represents the easiest path toward making an exceptional Blue Lagoon. Varying presentations of oranges, lemons, pineapples, and cherries cut to different specifications massively increase the drink’s visual appeal against its electric blue color. Colored straws, mint, umbrellas, and whipped cream all certainly step up the fun factor of the Blue Lagoon. In fact, we created a garnish with light blue cotton candy and a lemon slice to create a seaside scene. Most commonly served in a hurricane glass, the drink also shines in collins, pint, and wine glasses. Finally, others prefer to serve the drink up in a cocktail glass, which is another nice presentation of a drink meant to evoke the relaxation of a seaside experience. 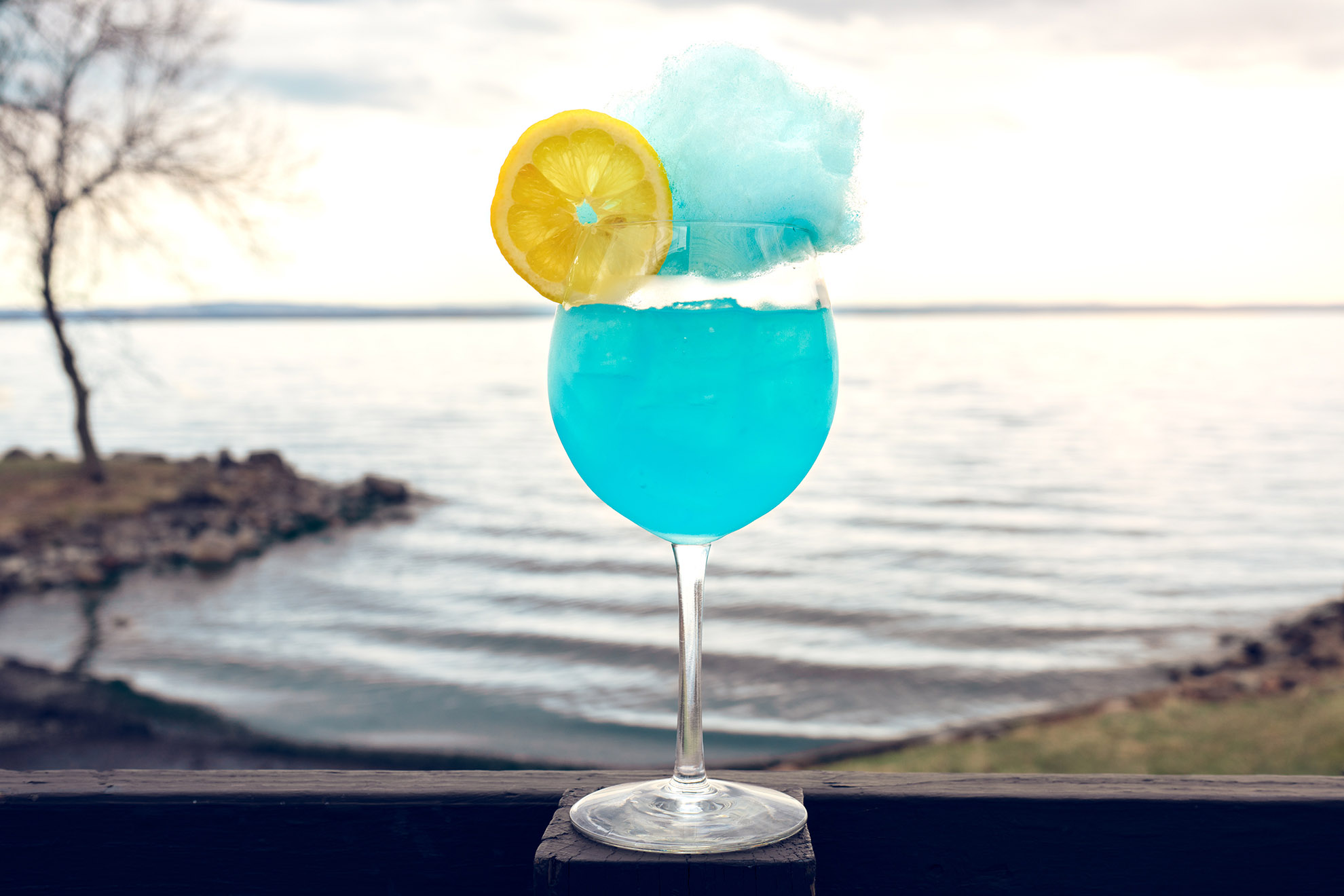